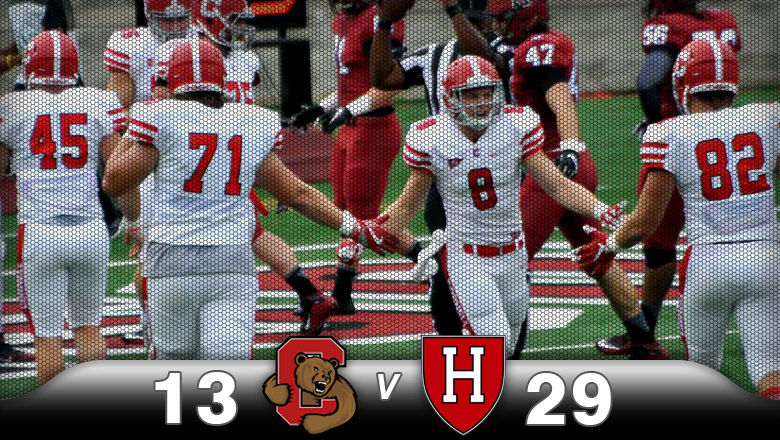 The Cornell football team proved last Saturday that it can compete with a nationally-ranked team, but right now it has to play its best game to win, as witnessed by the 29-13 loss to No. 16-ranked Harvard.

“I love playing Harvard because, in my opinion, it really has set the bar for our league in the past couple of years,” said Head Coach David Archer. “You have to love to play the best. I said before the game that I hoped we would play our best at Harvard, but unfortunately we didn’t.”

To beat the Crimson, Cornell needed to get on the board early. It didn’t. On the Big Red’s first offensive play, Harvard intercepted a Dalton Banks’ pass. Two plays and 8 yards later, the home team had a 7-0 lead.

Harvard then went up 14-7 by scoring on the last play before the intermission behind the excellent play of its multi-dimensional quarterback Joe Viviano. “Our defense put pressure on the quarterback,” said Coach Archer, “but unfortunately he was able to use his legs to extend some plays when we had pretty good coverage.”

The Ivy League’s only undefeated team scored nine points in the third quarter on a 6-yard run and a 31-yard field goal to take a 23-7 lead into the final 15 minutes of the game. The Crimson added one more rushing TD with 7:28 remaining for a 29-7 margin.

Cornell made one final scoring drive, going 80 yards in nine plays. The TD was a 29-yard Banks to Rogers pass that was caught in the end zone. Harvard recovered the ensuing onsides kickoff to ice its 27th victory in the last 28 outings.

The three interceptions, plus seven penalties didn’t help the Cornell cause. Banks didn’t have one of his better games, but give credit to the Harvard secondary for a superb effort. The sophomore signal caller was held below 50 percent passing for the first time this season. He completed 19 of 39 passes for 257 yards and two TDs. Rogers grabbed four passes for 80 yards and two scores, while the favorite target was senior wideout Marshall Deutz with six catches for 56 yards. Sophomore running back Chris Walker gained 40 yards rushing on just nine carries.

Defensively, the Big Red was led by junior safety Nick Gesualdi who had 11 tackles, a sack and an interception. Classmate Kurt Frimel, a linebacker, made six stops, had a forced fumble and broke up a pass. Senior safety Justin Solomon recorded five tackles, including a sack, and he blocked an extra point kick.

“We’re very disappointed with the outcome of the game,” said Archer, “but I still see a tremendous amount of progress in our program, and that’s what we’re here to do. I see this as a great opportunity for growth for our 2016 football team.”

There are plenty of challenges ahead. This coming Saturday, the Big Red entertains Sacred Heart (4-1) for the first time ever at Schoellkopf Field. The visitors suffered their first loss of the season two weeks ago to Wagner, and had a bye this past Saturday. Kickoff is 1:30 p.m.