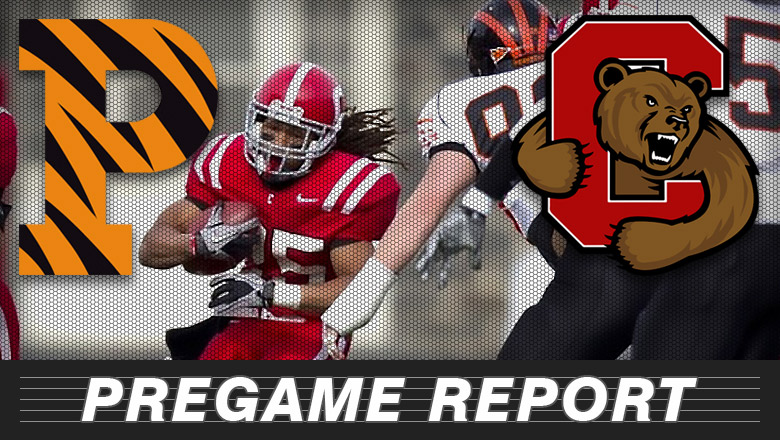 Why does the Big Red play much better in the second half than in the first 30 minutes of the game?

This is a question that needs to be answered as the team has shown so much progress in the first six games, but needs to take one more gigantic leap to be successful.

Cornell (3-3, 1-2 Ivy) has led at halftime just once this season, besting Yale 24-3 at the intermission; it was 10-10 at halftime at Bucknell. Just twice has the Big Red scored the first touchdown, again vs. Yale, and in a loss to Sacred Heart. In the first quarter, opponents are doubling up points on the Red, 56-28.

Maybe playing the last three of four games at home could be the key to getting off to a fast start.

This takes us right into Saturday’s action vs. Princeton (4-2, 2-1 Ivy) with a 12:30 p.m. kickoff at Schoellkopf Field on Trustee Council Weekend. Both teams lost heart-breaking overtime decisions last Saturday. The Tigers dropped a 23-20 OT game to Harvard, while the Big Red was losing in double overtime at Brown, 28-21.

A true test for the much-improved Big Red defense, Princeton is averaging 32.7 points per outing. Cornell Head Coach David Archer said, “They play high tempo, and try to run 100 plays a game with many of them ending in the end zone.”

Princeton’s leading receiver has been senior Isaiah Barnes with 22 catches for 295 yards from his wideout position.

The Cornell defense was a bright spot last weekend in Providence. It didn’t allow a scoring drive of more than 49 yards, and gave up just seven points on six series that started in Cornell territory.

Junior safety Nick Gesualdi, who ranks third in the FCS in interceptions (five) and 26th in passes defended, has 10 thefts for his Cornell career to rank seventh on the school all-time list. It is the most interceptions in 21 years since Doug Knopp ’96 had 13.

Junior inside linebacker Kurt Frimel (6-1, 234) forced a fumble and then returned it 71 yards to set up the game-tying touchdown in the fourth quarter at Brown. He ranks fifth nationally in forced fumbles. Five different players have led the team in tackles over the first six games, and seven have had at least one game with double figure stops. The defense has allowed just nine points in the fourth quarter.

All-American punter Chris Fraser has continued to pin opponents inside the 20 on more than half his punts (18-of-34) while still averaging 41.5 yards per kick.

Coach Archer said, “At the halfway point of the season, it can be easy to lose sight of the basics. We’re working hard this week on basics because the game comes down to the little things, i.e. blocking, tackling, catching, and protecting the ball. This is reinforcement week.”

One of the areas the Big Red will be looking to improve on is the rushing attack, and it will be crucial against Princeton—the Tigers are the top rushing defensive team in the Ivy League. “They also have forced the most number of turnovers,” commented Coach Archer.

A win on Saturday would avenge a 2015 loss for the fourth time this season as the Big Red continues to march forward.

Cornell continues to be at home on Nov. 5, when it entertains Dartmouth.