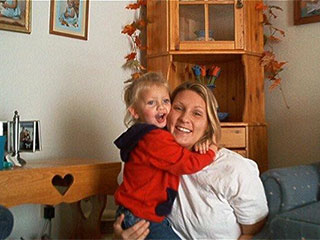 On November 20, 2003, CPT George A. Wood, then the company commander of the 1-67 “Death Dealers” of the Army’s 4th Infantry Division, was killed by an IED in Baqubah, Iraq. CPT Wood left behind a wife, Lisa, and a 3-year-old daughter, Maria.

I never met CPT Wood; I only knew him as “George” or “Woody.” 13 years earlier, CPT Wood and I played college football together at Cornell University, toiling on the offensive line. About a month before George was killed, our college coach, Pete Noyes, invited me to write an article for our college football newsletter about George’s transition from a college football behemoth into a position of military leadership in Iraq.

Sadly, he died only a few weeks after it was published and probably never read our distant salutation. It grieved me that soon after recalling our wonderful time in college, he was gone. The next thing I was asked to write was his obituary. 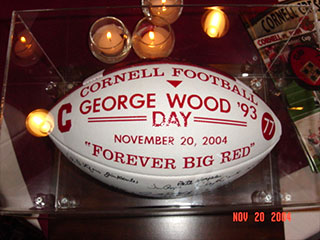 A year later, our team held George Wood Day to commemorate our fallen friend. Old teammates, coaches, military colleagues and George’s family all gathered in Ithaca, NY to memorialize a great man and a stellar example of non-negotiable values and austere dedications. We all agreed: Woody was our brother, a driven warrior at Cornell and beyond. He died as he lived, devoted to the mission in front of him.

I’ll never forget the words of George’s then 4-year-old daughter when she saw the photos of George that the team displayed. “That’s not Daddy!” she squealed.

It was an easy mistake for a youngster to make: George played college football at upwards of 320 pounds but had leaned out to about 200 pounds for his military—and parenting—career. Those words, initially cute and funny, became vaguely upsetting. Though we were trying to do something uplifting for her, she didn’t recognize the man we were talking about.

And despite our best intentions, when we all returned to our lives, things went quiet, as they often do. I didn’t speak with Lisa for several years, though through the grapevine, I heard that she had remarried, and that she and her new husband had started a family of their own. It was gratifying to learn that she had found love again and had slowly rebuilt her life. 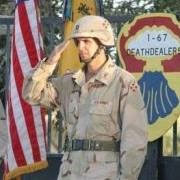 But with the advent of social media, we reconnected a few years ago. It was apparent that she had married a man who didn’t want to replace George but who warmly welcomed George’s memory into their lives. George was a giant of a man, and an even greater soul, and I maintain a deep admiration for Lisa’s husband, John, who knew he was tasked with safeguarding the widow and daughter of a man who cast a long shadow.

About six months ago, Lisa began contacting some of George’s old friends and colleagues, asking for a favor. She was planning on putting together something like a “memory box” for her daughter and asked people to relay stories, anecdotes, photos, videos or anything that would give their daughter a more complete impression of her father.

I forwarded some old newsletter articles I’d written about George and offered some stories we shared. But one particular observation seemed to capture what I admired most about George. I told Lisa, “George had the highest IQ to GPA ratio [high IQ, low GPA] of anyone I’ve even known. Learning was central to his life, classes were not. He simply didn’t care about small-change issues like ‘going to class.’ I suppose you could frame this to Maria like: ‘His priorities were always in focus and everything else he let slide.’ What was trivial to him was given its due.”

“Your dad blew off class a lot. . . ” It’s not exactly the sort of thing you tell a teenager. And George most definitely turned that around when he entered grad school. But I was hoping that the point Maria took from it was that her dad lived his life with a clear and inviolable set of principles and priorities. George had an encyclopedic knowledge of history, especially military history, weapons, warfare and the like. What would the nuances of 19 century literary criticism mean to such a person? George simply preferred to measure his efforts by the standards of his toughest critic: Himself.

I forgot about Lisa’s project and thought it had come and gone without any fanfare. But this past Saturday, I saw the result of Lisa’s efforts on Facebook. To celebrate their daughter’s 17th birthday, Lisa presented Maria with a box filled with letters, photos, videos, and other memorabilia that painted a robust picture of her late father.

As Lisa told me, “Most kids grow up never really knowing their parents, or the details of their childhood and college days. But they have the adult parent and it is enough. When you lose your parent as a little kid, it’s knowing him or her as others remember that gives you that relationship you lost…” 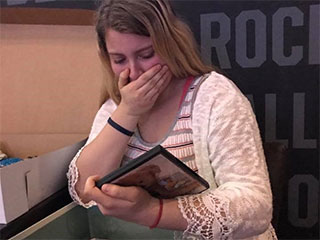 As soon as Maria opened the box, she saw an album with a photo of the three of them on the cover and immediately knew what the box contained. Maria paused for a few moments, trying to compose herself, but the joy and grief and pain and elation overwhelmed her.

The photos say it all. They depict a scene that’s both sad and beautiful, triumphant and tragic. Heartwarming and heartbreaking.

She opened the album to the first page. On it was a birthday card George had sent her when he first arrived in Iraq. “Happy Birthday Ria,” George had wished her on her 3rd birthday; it wasn’t until her 17th that she’d read those words. Her mother had kept the card sealed up with other keepsakes and felt that the time had come for her to see it.

The covers of several of the DVDs had photos of George holding her, and Maria realized she was about to see the first video of a father she only knew through photos. Over the next day or two, she read through the various letters Lisa had collected, prompting many questions and conversations. She braced herself when she began watching the DVDs, hearing her father’s voice for the first time. Having seen hundreds of photos of her father, video allowed her to finally hear the tone of his voice, his mannerisms, and his facial expressions. To finally see. . . him.

Recalling memories is the process of making the past present again, bringing the past into the present. But time is the enemy of memory. Time erodes the sharp corners of recollection. And when you don’t have any clear memories of something, when something was only vaguely present at the time, sometimes you need help. When you’re not even three, and your father spent a good chunk of your life deployed, memories of him become faint images informed by stories and imagination.

But if I’ve learned anything as a military spouse, it’s that the military doesn’t forget. Ever. I’d like to personally thank CPT Wood’s fellow soldiers who took the time to contribute a letter, transfer video footage, or forward a story to help brighten Maria’s special day.

On this Memorial Day, when many Americans acknowledge our fallen service members as a hazy abstraction—that is, if they do at all—one Gold Star child is able to delight in a fully realized portrait of her own father. Only now, as a young adult, she may be able to embrace her father in his full depth, flesh and blood, warts and all, for perhaps the very first time.