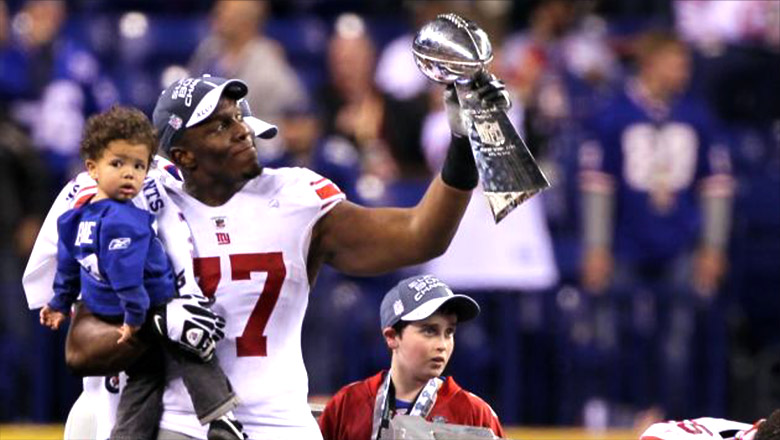 Dear CFA,
I just wanted to first thank you for your tremendous support this past season and the previous 3.5 years. It’s awesome to have a such an awesome support system behind us.

I am currently a senior and I recently wrote a profile of former player, Kevin Boothe’ 05. I am sending you a copy since it might be an interesting piece to send out for CFA members to read. As a member of Team 129, I hope you all have as much fun reading it as I did writing it.

Thank you, I hope you all had a great Thanksgiving and have a Merry Christmas.

In the summer of 2001, the son of two Jamaican bakers, Kevin Boothe, reported to Cornell for his first season of college football. Unfortunately, the 6’5” freshman and future New York Giant wouldn’t get his chance at playing with the Big Red until a year later. He barely even practiced. Many 18-year-old freshmen spend their first season adding weight in order to compete with 22-year-old men. For Boothe, it was the exact opposite. He needed to lose 50 pounds.

“I reported to Cornell at 367 pounds. I spent a lot of time with Coach [Howley],” said Boothe. “He helped me improve my mental toughness as well as my physical stature.”

Coach Howley, Cornell’s strength and conditioning coach, known for his charismatic mannerisms such as calling players “big boy,” had never seen a freshman as big as Kevin Boothe. Boothe and Howley became close friends that year. He helped Kevin lose the 50 pounds, building the foundation for the future Super Bowl champion.

“I always believed I would play in the NFL. It’s something that I figured would happen if I played to the best of my abilities,” said Boothe.

Kevin always believed he would play in the NFL, but that didn’t mean everyone else did. Unlike many future NFL players, schools like Alabama, Michigan, and his childhood favorite, the University of Miami did not recruit him. However, Boothe would use this as motivation.

“I knew that in order for me to get where I wanted to go, which was ultimately the NFL, I didn’t just have to be good at the Ivy League level,” Boothe said. “I made it a point to try to dominate regardless of what happened. I was going to let everyone know on the other team that number 77 meant business.”

Dominate he did. The Fort Lauderdale native became just the fourth Cornell player ever to be named First Team All-Ivy league three times, leading to a Second Team All-America honor in his final season. Eventually, the Oakland Raiders drafted him in the sixth round (out of seven) of the NFL Draft.

For many players, hearing your name called at the NFL Draft is a joyful moment. For Kevin, it was another reason to play with a chip on his shoulder. Prior to the draft, SportsCenter analyst Mel Kiper Jr. had Boothe ranked as the best Division 1-AA prospect. He was projected to be a 2nd or 3rd round pick. When Boothe dropped to the 6th round, it was nothing short of relief for the All-American.

“I watched every pick on Saturday. I was at home with my family and I locked myself away. As picks kept going by, I was wondering what was happening, but everything happens for a reason,” said Boothe.

Even though he wasn’t drafted as high as he hoped, Kevin was still thrilled at the opportunity to play football for a living. He worked his way into the starting lineup for the Raiders as a rookie but was cut from the team in the off-season. Again, Kevin wouldn’t give up on his dream. He signed a new contract with the New York Giants, the team that would bring him two Super Bowl rings.

New York brought its own challenges for Kevin. While he played in the 2008 Super Bowl, he wasn’t a starter. When 2012 rolled around, there was number 77 starting at left guard and just like at Cornell, he meant business, business as usual.

Throughout the years, Kevin Boothe faced plenty of adversity. Nothing came easy for him. He was under-recruited and had to sit out his first college season. He was drafted three rounds later than projected in the NFL Draft. The Raiders cut him after one season and it took him years to work his way into the starting lineup for the Giants. But for Kevin Boothe, adversity would not define him.

“Much like life, there’s ups and downs, but it’s more important how you respond to those situations,” said Boothe. “I managed to bounce back from them and to not let those difficulties define me, but help propel me to greater heights.”

In 2016, Boothe was inducted into the Cornell University Athletics Hall of Fame. He will forever be known as one of the most dominating football players to have ever stepped on Schoellkopf Field. As far as post-player life, Boothe now has his EMBA from George Washington University and is currently working for the NFL in the Legends Development Program. When asked about his career, Kevin paused and a feeling of joy seemed to fall over him.

“I had quite the journey,” he said.

Kevin Boothe has faced many challenges in his career but there is one thing that will always remain. The legend will continue to make Cornellians proud for many years to come.