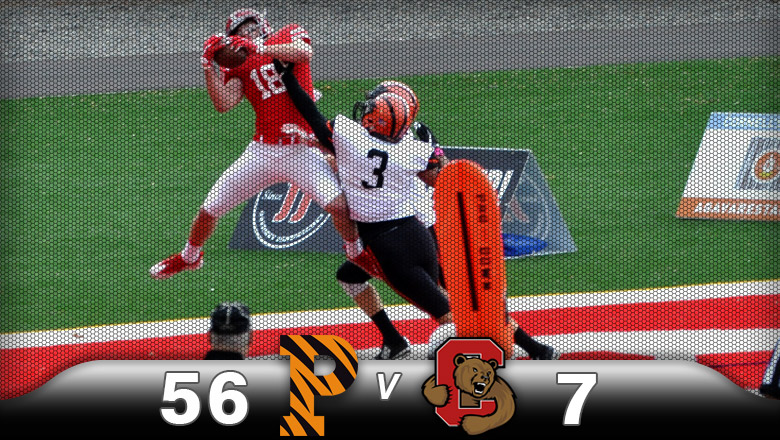 The Big Red’s 56-7 loss to Princeton (5-2, 3-1 Ivy) last Saturday at Schoellkopf Field was definitely a team defeat. Not much went right from the very beginning, and it didn’t get better except for a second-half opening drive.

“We played what I think is our worst game of the season,” said Head Coach David Archer to the Cornell Sun. “I don’t think that was the real 2016 football team out there. This game is not going to define the rest of our season.”

For some reason that certainly us loyalists don’t know, the team wasn’t ready to compete. The 56 points allowed by the Red was the most since Dartmouth hung 59 on it in 2007. And the 645 yards of total offense allowed was the second-most in school history, only surpassed by 690 yards by Brown in 2000.

“The defense just wasn’t what we’ve been accustomed to this year,” Archer told the Sun.

Cornell was buried by a one-man wrecking crew, although John Lovett received great support from his talented teammates. The 6-3, 225-pound junior was listed on the depth chart as a second-team signal caller. In Saturday’s game, he threw for four touchdowns, ran for two TDs, and was on the end of a scoring pass. He only accounted for 241 yards of total offense, but was responsible for 42 points.

“He just made a lot of plays. He can play with his arm, he can play with his feet,” Coach Archer said to the Sun. “Obviously we didn’t do a good job of stopping him. He didn’t take us by surprise because he was first-team All-Ivy in 2015 even though he missed the last month of the season.”

The Big Red came flying out of the locker room for the beginning of the second half. Taking the kickoff, Cornell marched 86 yards in nine plays, culminated by a great catch in the end zone by senior wide receiver Ben Rogers of a 15-yard pass by sophomore QB Dalton Banks.

This scoring march seemed to ignite the defense that threw Lovett for a five-yard loss back to his own five-yard line on Princeton’s next series. It was momentarily, as Lovett hit Isaiah Barnes on a quick hitch, while the Red was in a full blitz. A few missed tackles, and Barnes was off to the races for a 95-yard touchdown to make the score Princeton 42, Cornell 7 with still 25 minutes to play.

Princeton used two more scoring drives of 52 and 79 yards for the convincing victory. The Tigers rushing defense, ranked No. 1 in the Ancient Eight, held Cornell ball carriers to 49 yards on 20 attempts.

Banks completed 25 of 40 passes for 214 yards and a TD, and was intercepted once. Three different receivers had four catches apiece with Rogers recording his fifth TD aerial in 2016.

“You need to make a decision that it’s not going to define us,” Coach Archer told the Cornell Sun. “It’s not going to be carried over for anything longer than on Saturday. We can’t do anything about the Princeton football game right now, all we can concentrate on is Dartmouth and our last three games.”

Dartmouth, the defending league champion, comes to Schoellkopf on Saturday for a 1:30 p.m. kickoff. The Big Green is 3-4 overall and yet to win an Ivy game this year in four outings. Cornell has dropped four in a row for a 3-4 slate, 1-3 vs. Ancient Eight competition.