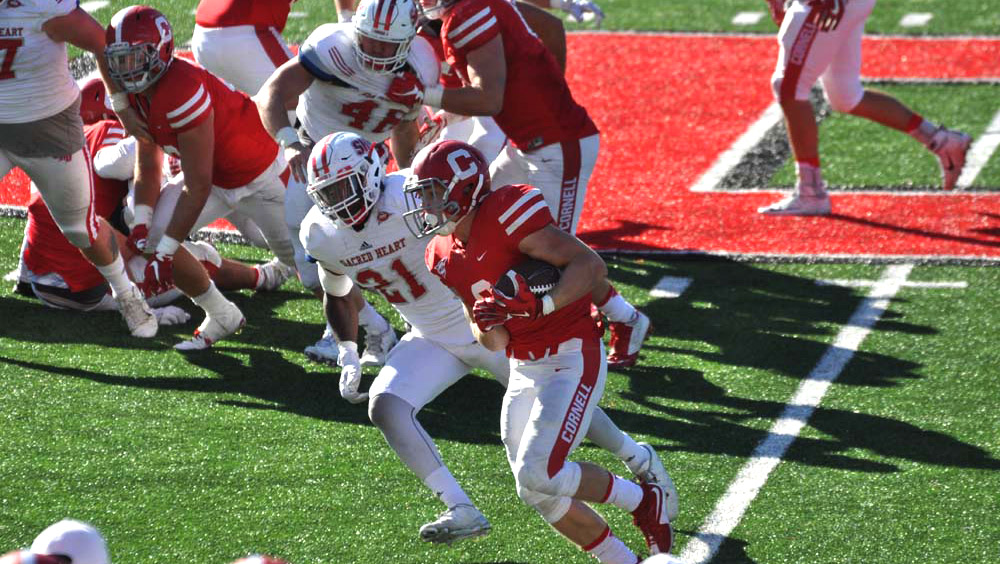 Despite the absence of leading rusher, sophomore tailback Chris Walker, the Big Red were extremely effective running the ball. Cornell gained 257 yards rushing. Banks showed his versatility with a 42-yard run in the third quarter. Running backs J.D. PicKell and junior Jack Gellatly teamed up for 170 yards on 34 carries. The offense averaged 5.2 yards per running play.

The Big Red’s success on the ground enabled it to dominate in time of possession, holding the ball for 34:22. This ball control offensive display was a major reason the Red was able to stay in the game against a very athletic, big-play oriented Sacred Heart team.

“We have, in my opinion, the best offensive line in the Ivy League, if not the country,” PicKell told the Cornell Sun. “Those guys all did a great job today, opening up holes for me and Jack — and Dalton even.”

• Entering the game, Sacred Heart had allowed zero touchdowns and six total points in the second half in its five previous games. As a result, Cornell’s second-half comeback is even more impressive.

• Cornell’s 257 rushing yards were three off the high mark under head coach David Archer, surpassed only by 260 yards last season against next week’s opponent, Brown.

• PicKell registered career highs with 22 carries for 95 yards and a touchdown.

• Cornell was 4-for-4 scoring in red zone and scored 24 of its points off five Sacred Heart turnovers.

• Freshman Nickolas Null’s 34-yard field goal in the second quarter was the first of his career. Gellatly’s touchdown in the first quarter was his first Big Red TD.