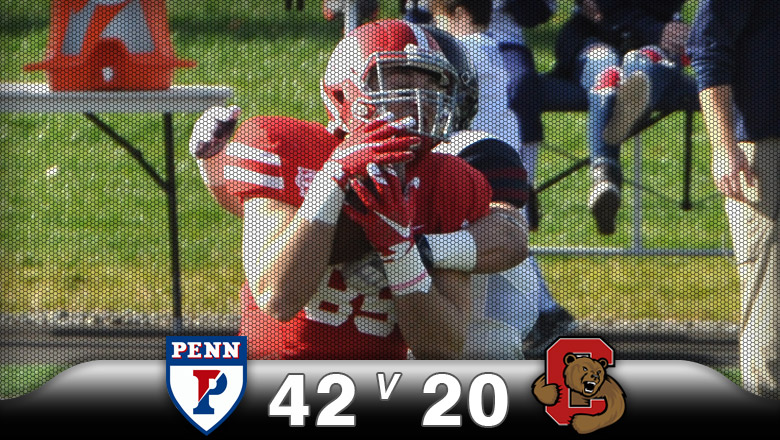 In a post-game media conference, it might be hard for a coach to be optimistic after a sizeable, but competitive loss. Not so with Cornell Head Coach David Archer.

Entering the media confab, Archer came in with a smile. He said, “I really thought we were competitive until the end. We just couldn’t overcome some of the things that you have to overcome to be able to beat a championship-caliber team.”

With Harvard losing to Yale, and Princeton beating Dartmouth on the final day, the Quakers share the 2016 Ivy League crown with the Tigers.

Penn scored just 6:52 into the game on a 1-yard run by junior running back Tre Solomon, who had 173 yards on 32 carries. It was obvious why Solomon is the No. 1 rusher in the Ancient Eight.

Penn added two more touchdowns before the Red pulled out another trick pass play from its playbook. Trailing 21-6 with 3:38 remaining before halftime, the Big Red marched 83 yards in five plays, finalized by a 58-yard TD pass from senior wide receiver Ben Rogers to Walker who legged much of the play into the end zone. The play started when Banks lateraled the ball to Walker, who then tossed the ball to Rogers, who patiently waited for Walker to make his way downfield.

“Why not pull out all your tricks in the last game,” said Rogers. “We’ve had that one in our back pocket for a while. It worked out that we were getting the coverage that we wanted.”

Showing its championship style, Penn added another touchdown with two seconds remaining before halftime on the end of a 10 play, 70-yard drive to go into the locker room up, 28-13.

Penn scored the lone touchdown of the third period with a short 42-yard drive after an interception of a Banks’ pass with 7 minutes to go. The TD came on a Quaker trick play in which offensive tackle Nick Demes took a lateral and turned it into a 7-yard scoring run.

Cornell didn’t give up, and it drove 75 yards in seven plays, culminated by a 17-yard scoring toss from Banks to senior wide receiver Marshall Deutz. On the previous play, Rogers, a high school quarterback who was recruited personally by Archer when he was an assistant, completed his second pass, a 23-yarder to backup quarterback Jake Jatis. On the play, Jatis had lateraled the ball to Rogers and made his way down field where he fought off two defenders to make the catch. In the media conference, Rogers said, “Jatis made an unbelievable play. That was completely on him. You try to go out there and try to make something happen, and luckily we were able to.”

Cornell, trailing 35-20, immediately went back on offense on an interception by sophomore cornerback DJ Woullard who returned the ball to the 20, but an unsportsmanlike penalty put the ball back to the 35. On the first play, Banks was intercepted to halt all thoughts of a possible upset.

Penn tacked on one more score with 4:53 remaining in the game with a 74-yard drive to take home the Trustees’ Cup for the third straight year.

The Cornell rushing attack stuttered again, as Walker was the only ball carrier with positive yardage (11×48). Banks, who seemed off target at times, still managed to complete 24 of 43 passes for 322 yards and two scores, but was intercepted three times. In his final game, senior tight end Matt Sullivan led 10 receivers with six catches for 70 yards. Rogers, in addition to his 81 passing yards, had five catches for 84 yards.

Coach Archer summed up the season by saying, “The growth this program has made to become competitive has been tremendous. We won four games, and had a couple of others that slipped away or we might have had a winning season.

“Much credit goes to the senior class. Football is such a demanding sport, and these seniors have pushed us to where we’re a competitive football team right now. That’s not easy, you need to be a true believer, and you must put in so much extra work to go from noncompetitive to competitive.”

Archer added, “We now hit the recruiting trail, as we have to bring in new players to replace these 26 seniors who have provided the foundation. We must develop players and keep pushing in the right direction.”