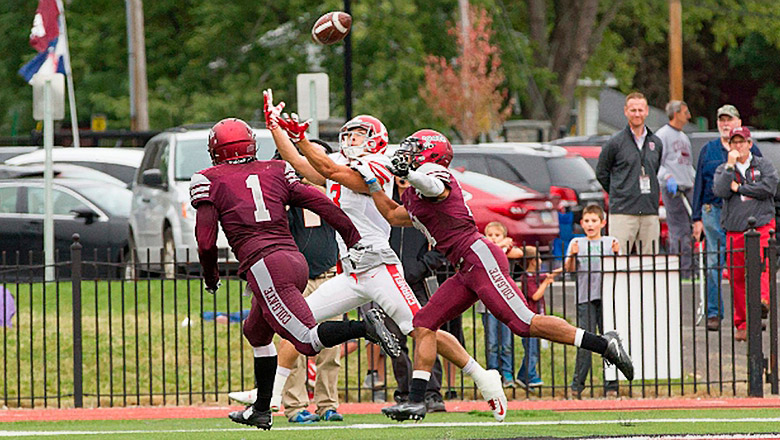 After watching Colgate score on its first three positions and then trailing a 31-12 lead at halftime, it would have been easy for the Cornell football team to think that it just wasn’t going to their day in Hamilton on Saturday.

That’s not how they were thinking in Big Red locker room at halftime.

“[At halftime] Jake Waltman brought us up and said, ‘This is the moment you’re going to be looking at 10 or 15 years down the road and say we had the biggest comeback we’ve ever had and we’re going to prove it today,’” senior wide receiver Collin Shaw told the Cornell Sun. “Everyone rallied around that before the half and it gave us so much momentum going into the second half.”

“We said, ‘Hey, no matter what happens, we’re going to win the game,’” said head coach David Archer ’05. “We stuck to it and they just kept making plays and it was just a day I’ll never forget.”

“We never lost the expectation that this was our game,” said sophomore linebacker Reis Seggebruch. “Our coaches stayed on us and even at halftime no one lost the faith. Everyone kept fighting like we knew it was our game to win.”

The team’s confidence was evident when the Big Red defense stopped the Raiders on a 4th and two at the Cornell 42 with 1:30 to play.

“Coach Archer had a smile on his face. He came over and he pointed to the two-minute menu and said, ‘Here, we go. We have enough time,’” Shaw told the Cornell Sun. “Strategically, we were able to get the ball back on our 40 and thought, ‘This is just like practice.’”

Quarterback Dalton Banks completed a nine-yard pass to wideout Marshall Deutz to move the ball to the Colgate 48, and the due teamed up for a 13-yard completion on the next play. After running for seven yards, Banks connected with a nine-yard pass to junior receiver James Hubbard to move the ball to the Colgate 19 with 28 seconds to play. That set the stage for Shaw’s terrific catch in the right corner of the end zone. Zach Mays kicked the extra point to give the Big Red one of its most satisfying victories in recent years.

“Everything is different,” Hubbard told the Sun. “Our seniors talk about resilience. I think that shows, we just know that we’re going to win. We expect to win now. We just have the confidence to go out there and do what we do.”