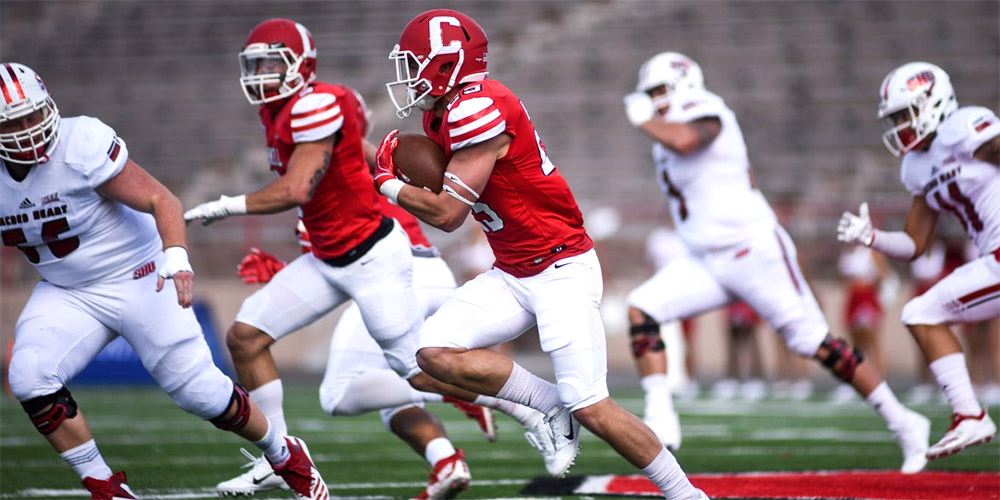 The stress of failing to secure a takeaway had started to weigh on the Cornell football defense. The defense had kept two high-flying offenses in check the first two weeks but had no turnovers to show despite the program’s “All About the Ball” mantra.

That changed quickly in Saturday’s 43-24 defeat of Sacred Heart. When junior cornerback David Jones read Pioneer quarterback Kevin Duke perfectly and jumped the route for a pick-six, the only thing that weighed on Jones was the premiere of Cornell’s “Turnover Time” — a flashy gold chain with a clock that reads “TT” at each hour mark, inspired by Miami’s now-infamous Turnover Chain.

Sophomore Phazione McClurge and junior Jelani Taylor were the masters behind Turnover Time, conceptualizing and making the chain in the offseason as another way to drive home the “All About the Ball” creed. It’s been sitting all season in its casing. Not anymore.

“The past two weeks we didn’t have a turnover so we were like we gotta get it out this week,” Jones said.

“That thing has been cooped for two weeks,” added head coach David Archer ’05. “Now it’s out.”

Jones added another interception in the dying moments of the fist half as Sacred Heart was firing for the end zone, and senior defensive back D.J. Woullard forced a fumble in the beginning of the fourth quarter. Any feeling that Cornell had lost its turnover mojo finally subsided.

“He just really set the tone,” Archer said of Jones, who returned a punt 46 yards on the drive after the pick-six to set up another score. “That let the lines of scrimmages establish themselves … They beat us badly [in 2015, and] a lot of our guys remember that. They were freshmen that year, they had some payback on their minds.”

No turnovers for either team in Cornell’s first two games was both a blessing and a curse. On the one hand, the offense wasn’t playing recklessly. On the other, the defense wasn’t doing its part to torture opposing offenses.

Archer said that Saturday was the embodiment of how he “pictured Cornell football for a long time.” Establishing the run? Check, with 263 rushing yards and three touchdowns on the ground. Stopping the run? Check, with Sacred Heart’s Jordan Meechum and his 128.7 yards rushing per game being held to just 44. Takeaways? Check, thrice over.

“Turnovers are literally the difference [in] a game sometimes,” said junior running back Harold Coles, who rushed 121 yards with a 85-yard score. “The way that we’re able to protect the ball and the way that the defense was able to take it away from them is a momentum changer.”

The long-awaited win finally came to East Hill, and the only thing that made the smiles shine more was the glisten in the gold Turnover Time chain that finally found its way out of the box.

“Being the good Cornellian I am, I was joking that we should we just have it be a big Uris Library clock tower,” Archer said.