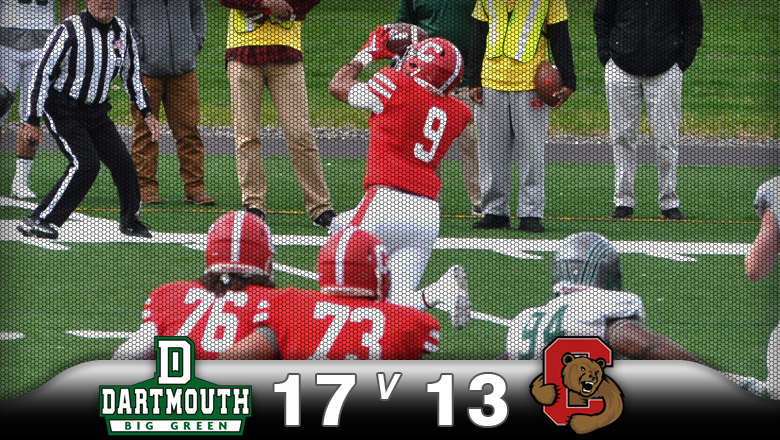 Last Saturday afternoon at Schoellkopf Field, Cornell (3-5, 1-4 Ivy) and Dartmouth (4-4, 1-4 Ivy) combined for six scores in the red zone. Unfortunately, the Big Red had to settle for a pair of field goals and one TD, while the Big Green recorded one 3-pointer and two touchdowns for its 17-13 win.

Head Coach David Archer summed up the loss by saying, “It just stings today because the game was out there to be won, but we didn’t deserve to win; we didn’t do enough to come away with the victory.”

The game opened with Cornell on a roll. After returning the first kickoff to its own 26, the Big Red began 71-yard march to the Dartmouth 3. On fourth and goal, freshman Nickolas Null booted a 20-yard field goal to make it 3-0.

Sophomore quarterback Dalton Banks completed his first six passes during the drive. “We have a good, quick offense,” said the first-year starter in the postgame media conference. “We were moving the chains. Every week we try to take what they give and that was our game plan because of what we saw on film.”

The game continued to go well for the Red, as the defense held Dartmouth to a three-play, eight-yard series after the kickoff.

Starting another long march, Cornell went from its own 44 to the Dartmouth 5 in 15 plays (nine pass attempts), but again couldn’t punch it into the end zone. Null was called upon to make a 22-yard field goal.

The first quarter ended with the home team up 6-0 and it held the ball for 12:41 to 2:19 for the Big Green. Banks completed 12 of 19 passes for 96 yards to four different receivers in the first 15 minutes. The Red had eight rushes for 16 yards (including a couple of Banks’ sacks).

The second quarter was nearly a wash, although Dartmouth tallied a 32-yard field goal to send the two teams into the intermission with Cornell holding a slim 6-3 lead. In the first half the Red was on offense for 18:02 to 11:58 for the Green.

Cornell continued to be more on offense than defense in the third period, and finally dented the end zone with 4:26 left in the period. Going to the air for 12 times of a 17-play drive resulted in a 4-yard touchdown acrobatic, juggling catch by junior tight end Hayes Nolte in the back of the end zone to give the home team a 13-3 lead.

The drive was 17 plays and consumed 7:34 minutes of the 15-minute third quarter.

The story changed in the fourth quarter, as the Big Green dominated play with two touchdown scoring plays, and held the ball for 13:11 minutes. Dartmouth had 28 offensive plays to Cornell’s eight, and converted 6-of-7 third downs.

Cornell’s only turnover of the day (a fumble) set up Dartmouth for the winning drive with 9:15 left in the game. With 6:42 showing on the clock, wide receiver Charles Mack caught a 7-yard pass from quarterback Jack Heneghan to give the defending Ivy League champions their first lead of the game and initial Ivy League win of 2016.

Dartmouth, the top defensive team in scoring allowed, held the Big Red to only one more series (minus 6 yards) for the rest of the game.

Banks completed 28 of 43 passes for 216 yards, but the offense could muster only 50 yards on the ground in 21 attempts. Meanwhile, Dartmouth had 407 yards of total offense, with Heneghan hitting on 22 of 33 passing attempts for 226 yards.

The visitors also used their high-powered ground game with 179 yards on 42 carries. In the postgame media conference, junior inside linebacker Kurt Frimel, who had eight tackles, including one for a loss, said, “The problem with stopping the run came down to one guy making a mistake or not filling a gap.”

The game was the 100th meeting between the two schools, and the Big Red has now reached the century mark in games played in three series (Penn-122 and Columbia-102).