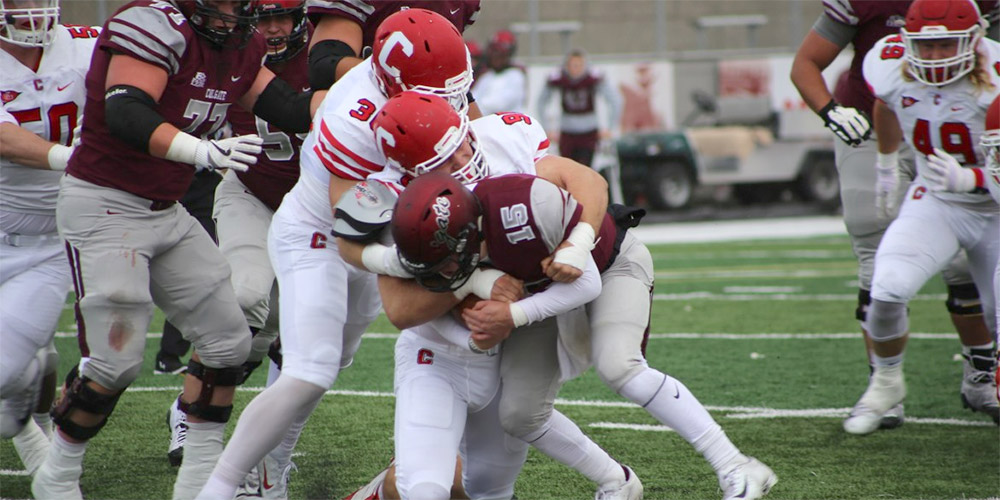 Colgate’s defense proved why it’s the nation’s best on Saturday, shutting out the Red and giving the Raiders a decisive 31-0 victory.

“If my quote from two years ago was a day I’ll never forget, this one is a day I’m going to try to forget really fast,” said head coach David Archer ’05.

The Red, whose record falls to 2-3, kept pace with No. 17 Colgate in the early going, but the Raiders quickly ran away from the Red in the one-sided contest.

Senior quarterback Dalton Banks and the Cornell offense couldn’t crack the FCS-best Raider defense, turning the ball over on downs four times and suffering four three-and-outs. Banks finished 14-of-25 passing for 91 yards and an interception. 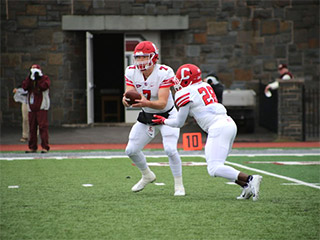 “They’re just a really athletic defense that flies around, so they have 11 hats going to the ball,” said junior running back Harold Coles, who had just 46 yards on 14 carries.

Despite not scoring any points against the nation’s best defense, Cornell’s own defense kept pace with the Raiders in the first half, limiting the Colgate offense to 10 points.

Save for a 50-yard run by running back James Holland Jr., which set up Holland’s 9-yard touchdown catch, Cornell mostly kept the Colgate offense at bay in the first half.

But the Red didn’t last long in the second half in the 100th meeting between Colgate and Cornell. The Red’s offense was 4-for-16 on third down and managed only 3.3 yards per play.

“Even on our opening drive I felt really good there, we put a couple other drives together and just couldn’t finish it out against a good defense,” Archer said.

The Raiders came out firing on the first drive of the third quarter, using a 36-yard flea flicker completion on the first play to move into Cornell territory. A few plays later, Holland punched in his second touchdown of the afternoon to give the Raiders an insurmountable 17-0 lead.

“I think [Colgate] came out of halftime with some adjustments that worked really well up the middle,” said junior defensive lineman William Baker.

The Red then quickly went three-and-out and, looking for a spark midway through the third quarter, tried a fake punt. Junior linebacker Justin Bedard’s pass was intercepted and the Raiders used a short field to extend their lead to 24-0 on a 21-yard touchdown run from quarterback Grant Breneman. 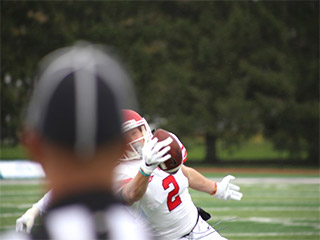 The final two minutes of the first half featured a bit of everything, including two plays on which junior kicker/punter Nickolas Null’s absence due to injury was noticeable.

Cornell looked poised to cut its deficit to one score, taking over with 3:25 left and all three timeouts available. But the drive stalled and a punt went awry, with long snapper Thomas Ferrara’s snap sailing over the head of freshman Koby Kiefer. Kiefer, upon recovering the loose ball, was hit hard by Colgate’s Nick Alvarez, seemingly giving Colgate possession inside the Cornell 20 yard line with 16 seconds left.

But the Raiders’ prime scoring opportunity was negated after a video review led to a targeting penalty and the ejection of Alvarez, giving the Red yet another chance to get on the scoreboard. Zach Mays’ 43-yard field goal missed as time expired.

With the score already 24-0 Colgate in the fourth quarter, Colgate continued to stuff the Cornell offense, which was without what Archer called its “spark,” junior quarterback Mike Catanese, who was out with an injury. The Red advanced inside the Colgate 20 midway through the quarter but failed to convert on a 4th and 2.

“We feel like if we stick to [the running game] it’s going to hit and today it didn’t,” Archer said.

Sophomore quarterback Richie Kenney, in for a garbage time series late in the fourth, threw a pick-six to Colgate’s Tyler Castillo, making the score 31-0.

Done with the non-conference portion of its schedule, Cornell plays on the road against Brown next weekend in the first of five consecutive Ivy League contests.