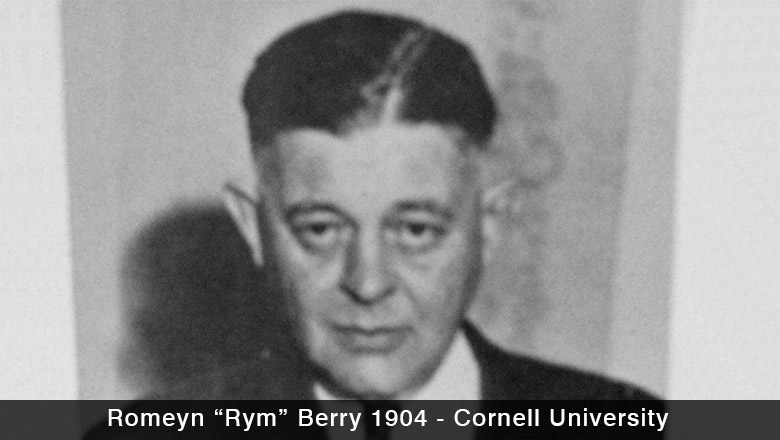 The words of Romeyn Berry 1904 – “as we cheer for the big red team” first appeared in the Cornell fight song he wrote in 1905 (“The Big Red Team”). That was an inspiration to Nebraska, Denison and many other Big Reds who would later choose the same nickname.

Berry, grandson of a Cornell trustee and teacher of agriculture, was graduate manager of Cornell Athletics during some of its finest years, from 1919 to 1935. A veritable laureate of Cornell, he wrote, with playful pen, for Cornell Alumni News (Magazine), the Crescent game program, and the New Yorker. He entered Cornell at 17 in 1899 and went out that day for freshman football. He was to become editor of the Widow (a campus humor magazine) and wrote Mater’s first Masque show—but did not shine on the playing field.

He recalled, in the Niagara 1949 game program, that during his first day at Cornell in ’99, the team had no head coach. Pop Warner, who led the ’98 team to a glowing 10-2 record, including eight shutouts (two over Syracuse), had left Cornell.

Almost a week later, Percy Haughton took over at downtown Percy Field. He was a tough taskmaster and decidedly not popular with his players. “A highly chaotic and disorganized condition” prevailed in the early Haughton era, Berry wrote in the Niagara program. “Echoes rang with curses upon the new coach emitted in chorus by the entire squad,” he recalled. But three weeks later, Cornell had its first conquest of Princeton. Six more foes fell that fall, all by shutout, and as the Big Red outscored the opposition 134-52.

For $10 a week, the team dined on “tenderloin steak smothered in poached eggs and garnished with lamb chops plus (and this was mandatory) a prescribed amount of stewed prunes three times a day,” he noted.

And “Of course, I dread the moments in every game when you wonder if your machinery is going to stop right there or resume operations, when the referee gives judgment on a close one,” Berry added. “Bobby Young hit a wobbly, unconventional (but timely) dropkick” in the fading twilight for a field goal that settled a 5-0 twisting of the Tiger’s tail in Berry’s first season. He wrote that was his first Cornell cliffhanger and the distress symptoms he experienced then were no less alarming a half-century later.

In a program piece he entitled “Anything Can Happen in the Dartmouth Game,” he offered: “Two Cornell profs left the arena in 1926 and went home at halftime (with the scoreboard showing Dartmouth 23, Cornell 0) because they feared to have their heart strings torn by what the second canto would reveal. Not until the New York Times, a very reliable paper indeed, arrived the next morning would they credit the report that Cornell had performed enough miracles in the concluding moments to drag a lost cause out of the fire and win by the margin of a single point (24-23).”

Three Big Red teams—Gloomy Gil Dobie’s unbeaten 1921-22-23 powerhouses led by National Hall of Famers Eddie Kaw, Geoge Pfann and Frank Sundstrom—were deemed by many to be national champions. Pop Courtney’s oarsmen ruled the waves. Jack Moakley’s track and field team and cross countrymen ran wild, ahead of the pack. Nicky Bawlf produced multi-winners in soccer and hockey. All the above made Mater proud during the Berry regime. Schoellkopf Stadium and its Crescent rose higher above Cayuga’s waters on Berry’s shift. He brightened the pages of the Cornell Alumni Magazine (News) with his column “Now in My Day,” and his 1950s book “Behind the Ivy” delighted many generations of Cornellians.

In “Our Cornell,” a slim volume of nostalgia by notable Cornell writers like E.B. White, Morris Bishop and Hendrik Willem Van Loon (published in 1939), he recalled the time Cornell did NOT go to the Rose Bowl. “In 1921,” he wrote, “we had a pretty good football team.” Unbeaten. The media began to hint at a Pasadena New Year’s for C.U., but there wasn’t much talk about that in Ithaca. After Dobie’s bunch finished the season by quashing the Quakers of Penn, 41-0, Berry feared the invitation would come and the required faculty approval would not be forthcoming. As it turned out, half the team turned up at his doorstep Sunday morning. Their message? “We CAN’T go to the Bowl. We’re all back in our work and we’ve got to plug from now to February to catch up and stay in.” They prevailed—both in the classroom and for the tyrannical Dobie.