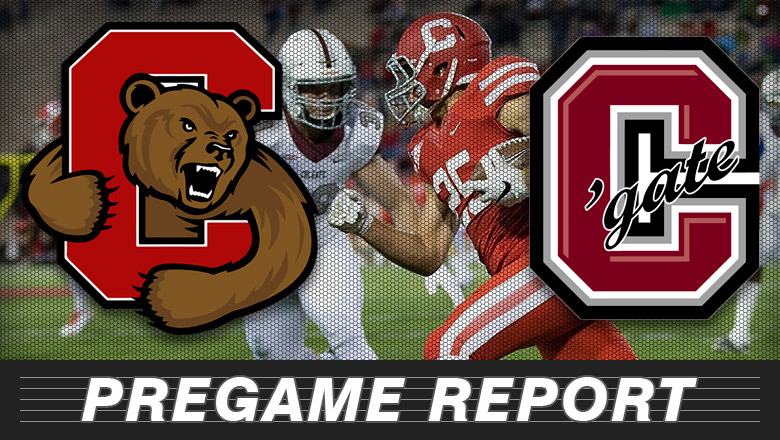 It will be the 98th meeting between Cornell (2-0) and Colgate (1-2) when the Big Red travels to Hamilton for a 1 p.m. kickoff on the first day of October 2016. It’s been a fierce rivalry with the two foes representing two different leagues.

“Colgate hasn’t played a home game yet,” explained Cornell Head Coach David Archer, “and it will be excited to play before its Homecoming crowd.”

Looking at game results, one would think that the Raiders would be an easy touch. Think again. Colgate may be 1-2, but it opened the season with a 33-7 loss to BCS member Syracuse, bombarded Yale 55-13, and last week dropped a 33-31 decision at Richmond ranked No. 7 in the FCS standings. Going into last Saturday’s game, the ‘Gate was ranked No. 22, but has since dropped out of the top 25.

The Big Red is 2-0 for the first time since 2009 when it opened the campaign with victories over Bucknell and Yale. As the late Yogi Berra would say, “deja vu all over again.”

If you did not attend last week’s 27-13 victory over visiting Yale, you missed an excellent display of both team offense and defense. Almost 16,000 fans witnessed a Big Red team that is completely revamped from a year ago.

Sophomore quarterback Dalton Banks, in his second varsity start, completed 23 of 32 passes for 306 yards and two touchdowns with no turnovers.

Defensively, the Big Red has cut its scoring defense in half (14.5 in 2016, 29.6 in 2015) after two games. The big reason is the turnovers that Cornell has created. The men without the ball have picked off five passes and forced seven turnovers a year after intercepting just four aerials with nine turnovers in 10 games last season.

Senior linebacker Jackson Weber turned in a defensive gem vs. Yale. He had 11 tackles, one tackle for a loss, one pass breakup and one interception. He should have helped the Big Red make a complete sweep of weekly Ancient Eight honors.

Colgate isn’t hurting for an outstanding quarterback, as Jake Melville has passed for 454 yards and six touchdowns in three games. He has also run for 126 yards and one TD. “Colgate’s quarterback is a dynamic player who can beat you both in the air and on the ground, “said Coach Archer. “We must stop him to shut down their offense.

“We are concentrating on learning to have a great practice week after a big win, and how to handle success. We’re a little banged up, but practices are still intense.”

Colgate was undefeated in the Patriot League last season, and won its first two FCS playoff games before losing to Sam Houston State.

Coach Archer summed it all up by looking at this fierce rivalry as a great non-league test before opening up the Ivy League season on Oct. 8 at Harvard.