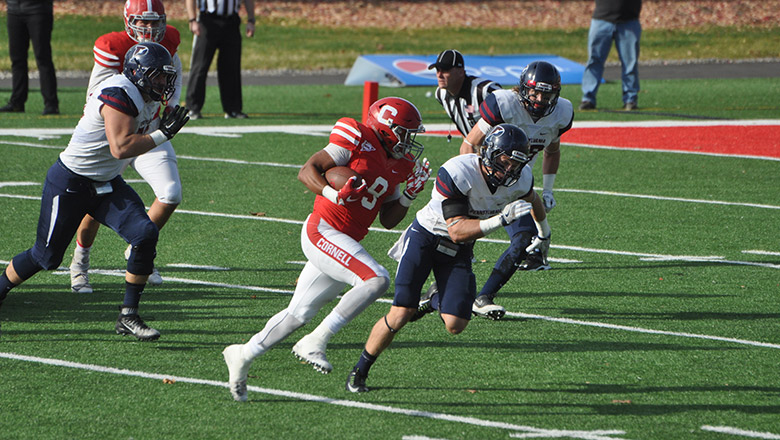 Beginning in 1893, when Democrat Grover Cleveland, the 22nd and 24th U.S. president was in office, Cornell lost its first eight Penn games, starting with a 50-0. They’ve played every year since 1918, a World War I year. They beat the ancient foe for the first time in 1901, an 11-1 season under coach Ray Starbuck and guard and captain Bill Warner, Pop’s little brother. Cornell didn’t quash the Quakers again until 1913, quarterback Charley Barrett’s first year. Barrett made the decisive touchdown early in the 10-0 conquest of the men of Harvard in 1915, ending the Crimson’s four-year unbeaten streak and supplanting the ‘Vard as national champion. A 24-9 wipeout of Penn completed that Schoellkopf inaugural year. That historic victory was the third consecutive win over the men of Penn, who joined in creating the plaque at the Schoellkopf front door honoring National Football Hall of Famer Barrett. (Pop Warner is in the National Hall as well).

Between 1915 and 1929, Cornell prevailed over Penn just three times — in 1921-22-23, the heyday of Coach Gloomy Gil (the Dour Scot) Dobie, a National Hall of Famer, along with superbacks Eddie Kaw, George Pfann and tackle Frank Sundstrom. The unbeatable Big Red was ranked tops in the land all three years. The ’21 team beat Case Western Reserve, 110-0. Dartmouth, 59-7, Columbia, 41-7 and Penn 41-0. That team outscored everyone, 392-21; then ‘twenty-two, 339-27, and ’23, 320-23. Kaw conquered the elements that monsoony Thanksgiving ’21, slogging through the soggy Franklin Field mud with help from his friends for five touchdowns. Members of the Cornell Football Association voted Kaw and Pfann to the Cornell All-Time Football Team (1887-2003) as defensive backs. In his “A History of Cornell,” Morris Bishop reports: “Eddie Kaw was a mud horse, with an uncouth style, striding farther wih one foot than the other. He used the ball for interference, smiting opposing tacklers with it.. . . . George Pfann’s underslung center of gravity made him impossible to overturn. ‘He crept, crawled, and ran on all fours with tacklers draped about him.’ ”

From 1924 to ’48 Cornell went 6-16-2 against Penn. The Penn captain-elect, tackle Cleo Calcagni, played for Cornell in 1943. Transferred between traditional rivals for military training, he was eligible to play in Carnelian rather than red and blue. He was willing to wear a Cornell uniform but insisted on a Penn helmet atop Big Red livery. By 1948, most of the G.I. Johnnies had come marching home again and were joined by talented 18-year-olds for whom the call was awaiting. By Thanksgiving time Cornell’s mixture stood at 7-1 (sank Navy but not Army). A Turkey Day crowd of 78,000 stuffed Franklin Field. Penn’s ferocious center/linebacker Chuck Bednarik led a mighty defense but Cornell Coach Lefty James’ blockers made room for Moose Miller, Paul Girolamo and Bob Dean (subbing for injured fullback Jeff Fleischmann). Dean and company scored first, Dean from the 20, but Penn pretty soon responded and it was 7-7.

Then Pete Dorset connected with Jack Rogers in the end zone for a go-ahead TD. Next, end Russ Schuh picked up a Penn miscue and ran it 20 yards in. That made it C.U. 20, P.U. 7. Hillary Chollet knocked down a Penn pass to the end zone but the Quakers pushed one over and it was 20-14 at the half. Dorset’s pass to end Walt Bruska appeared to be good for 6. but it was ruled out of bounds. That’s still denied. Dean’s field goal made it 23-14 to stay and Cornell was unofficial Ivy League champion. Bruska, Chollet, Dean, Dorset, Fleischmann James, Miller, Rogers and many others of that team are Cornell Athletic Hall of Famers.

Only Captain Joe Quinn, Dean and Rogers of the ’48 James Gang were gone and richly able new guys were ready, from the second in a row unbeaten freshman team, when the Big Redders assembled for ’49. They sailed past Niagara, Colgate, Harvard, Yale, Princeton, Columbia and Syracuse. Only Princeton (14-12) was close. Then came Dartmouth, at Hanover, and defeat (16-7) . In Philadelphia for Thanksgiving, Redman Bernie Babula, early in the day, took a pitchout from Dorset to skirt end but dropped the ball — and caught it on the bounce and kept going for many yards and six points. It was 21-7, Penn, at the half. Fleischmann plunged over on two TDs on plays that James had rejiggered during halftime. Linebacker Chuck Taylor snatched a Penn man Reds Bagnell pass late in the day and Dorset hit Bruska in the end zone. Harvey Sampson picked off another Penn pass and Bill Kirk kicked the field goal that made it Cayugans 29, Quakers 21 to stay. For the second year in a row Cornell ruled the Ivies. Chollet, O tackle Dick Clark and center John Pierik were first team All-Ivy. Dorset and Bruska were second team All-Ivy.

The promising sophomores of ’48 were now senior leaders. Pierik and back-up Taylor co-captained the 1950 team. There was a new batch of undefeated ’49 freshmen to build a new Big Red which conquered everyone but Columbia and Princeton en route to Franklin Field where Quakers who had lost only to California (14-7) and powerhouse Army (28-13) lurked. A fierce hurricane swept the East that weekend. Many games were scrubbed or postponed. Some 52,000 tickets were sold but just 17,846 showed up to watch from under the upper deck. Cornell punter Bill Whelan, kicking before the howling wind, set one sailing 63 yards. Another kick, pushed aloft, into the wind, went for minus five yards. Penn’s All-America single wing tailback Reds Bagnell. needed a scant 24 yards rushing to establish a new Eastern record (1610 yards, set by Paul Governali of Columbia in 1942). Bagnell ran into pounding rain, punishing wind, and Big Red DT Jim Jerome among others. Bagnell carried for eight yards net and passed for another eight for a total of 1603.

Midway through the first quarter, an already muddied-up Redman fumbled the ball away. Penn recovered and put 6 on the board. That completed their scoring for the day. But early in the second quarter, Fleischmann splashed through from the one, capping a march featuring sophomore halfbacks Whelan and Bob Engel. Bill Kirk kicked the PAT. In the second period, C.U. QB Rocco Calvo, back to pass, slipped around left end for 11 yards on fourth down, keeping alive a grinding, gritty drive from their 19 in which runners Bill Scazzero. Stu Merz and Hal Seidenberg found the daylight in the Penn D. Fullback Seidenberg splashed over from the half-yard line. So it was Big Redders 13, Quakers 6, to stay. Jerome’s timely third down grab of Bagnell inside thc Red five yard line late in the day and a Bagnell pass that failed meant no second TD for the Quakers, a 13-6 upset finale and a 7-2 year for the Cayugan Colossus. Jerome, Seidenberg, Whelan and OT Chuck Metzler were first-team All-Ivy. End Vic Pujo made honorable mention. Fleischmann is fullback on the Cornell All-Time team chosen by CFA members.

Calvo, Pierik, Sampson, Seidenberg and Whelan are members of the Cornell Athletic Hall of Fame.

From 1954 to ’73, Cornell went 15-4 vs. the U. of P. During the Fifties, Penn was playing people like California, Georgia, the well-armed Army and Notre Dame. Then came formalization of the Ivy League and Penn was less dominant for awhile. Since ’74, the Quakers have held a slight edge.