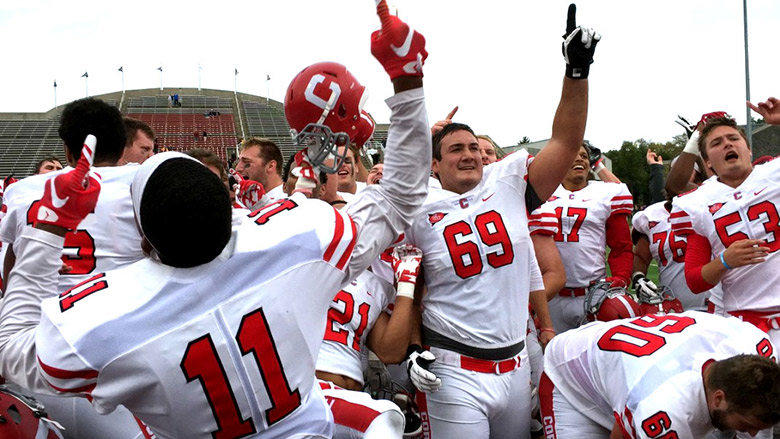 Dartmouth won at NYC’s Polo Grounds, home of the Yankees and Giants, in ’19 and ’20. In ’21, Eddie Kaw and George Pfann led the National Champion Red to a 59-7 waltz there, where the game was usually played in the early 20s. That 14-3 downer in ’20 was Cornell’s first defeat in a 6-2 season. In ’21, the Dour Scot Gil Dobie had his lads scrimmaging after the game. Asked why, he replied “Those bums didn’t expect to get away with THAT performance did they?“ A 41-7 taming of the Columbia Lions, and 14-0 over Springfield followed before rain fell on Franklin Field on Thanksgiving and Kaw slipped through the drops and through the quagmire for five touchdowns in a 41-0 pounding of Penn. The unbeaten ’22 and ’23 National Champ Redmen outscored all opponents 339-27 and 322-33 respectively, with five and three shutouts and allowed only one team – Albright — to score in double digits. That 32-7 drubbing was Dartmouth’s only defeat in ’23. Cornell’s 27-14 loss was one of four for C.U. and wrapped up an unblemished record for Dartmouth in ’24. The Green were clean again in ’25. Its 62-13 was the first of Cornell’s two losses.

Cornell crowned Columbia , 17-14, at the Polo Grounds in ’25 and made its first trip to Hanover the next week. There they encountered Dartmouth’s Swede Oberlander, a passer, blocker, runner and kicker extraordinaire. He ran 50 yards for Dartmouth’s only TD overland. Eight more were achieved overhead. That National Champ shut out five foes. Only Cornell managed double figures against them. A Rose Bowl invite was graciously declined.

Dartmouth was in Ithaca again, for the second time, in 1926. It held a 23-7 lead going into the last quarter. Eddie Dooley, Big Green giant hero, led the way but missed a dropkicked field goal attempt in the third quarter. The players Dobie had dissed as “the poorest squad I’ve ever seen at Cornell… Their softness is slowing us a lot more” stepped it up in the last quarter, former Ithaca Journal editor Bill Waters ’27 noted in a game program a half century later. QB Victor Butterfield and Co-captain guard Emerson Carey seized the momentum and, with less than a minute to play, the score was 23-21 and it was Cornell’s ball at midfield. Dobie’s bums marched to the 12 before a roaring Jazz Age Crescent. Carey’s field goal turned the tally to 24-23. The historic victory ended with Dartmouth on its 20. The bums finished the year at 6-1-1.

In 1929, the year the Stock Market was beset by the BIG turnover, took a 6-0 record to Hanover but went down, 18-14 and then lost to Penn, 17-7. Dartmouth lost only to Yale and Navy. Fast forward to ‘38, when Dartmouth carried a winning streak of 17 into Ithaca.. It was a Big Red letter day, 14-7, over Earl Blaik, Bob MacLeod and company. Coach Carl (the Gray Fox) Snavely’s Big Redders, like first team All-Americas end Brud (end around) Holland, tackle Bill McKeever and guard Sid Roth lost only to Syracuse but were fit to be tied at Penn — no score. Dartmouth, which hadn’t lost in its last 22 outings, was on the short end two games after the 21-6 win over Penn State that kicked off an 18-game streak in which C.U. never lost.

Ranked first in the land by those who did not prefer Texas A&M in ’39, Snavely’s mighty single wing machine marched on again to the top (where it belonged) in ’40. The Redmen had bowled over Ohio State and Army and four others when they pulled into snowy Hanover in November. Blaik’s bunch shut the machine down but managed a field goal. In the final clicks of the clock, Cornell’s Walt Scholl passed to Bill Murphy in the end zone and it appeared that the day had been saved, 7-3. But film showed that the score had come on a fifth down, following a penalty. The team voted not to accept a tainted score. Cornell President Edmund Ezra Day, Dartmouth 1905, said his Alma Mater would turn down any offer to relinquish the Fifth Down result. Cornell sent a message of congratulation to Dartmouth on its deserved 3-0 conquest. To date no such response as Day spoke of has appeared. Dartmouth’s season record remains 4-5. Cornell, which lost at Penn, fell off the top at 6-2.
Dartmouth had bowed only to Penn and Cornell had sunk the formidable Navy but lost only to the super power Army when Green clashed with Red in the November ’48 sleetfall of Schoellkopf. Dartmouth Dartmouth grabbed a lead before the game was two minutes old. Eric Jensen and Chuck Taylor blocked the PAT. Frank Bradley skirted right end from his 21 and behind inspired blocking charged over the goal line, breathless. He was wearing an iron mask over his broken jaw. Score: Red 7, Green 6. Bob Dean, subbing at fullback for Jeff Fleischmann, who broke an ankle just before halftime, plunged over from the two. With six minutes left to play, it was 26-14, partly due to a dodging 75-yard dash, in which Dartmouth’s Joe Sullivan blasted off tackle, bouncing off almost all the Cornellians on the field and losing his helmet along the way. In the fourth quarter, Paul Girolamo pounded over but Dean missed the point. Near the end, Cornell drove 11 times from its 40. Dean ran the ball in from 23 yards out. This time Dean kicked the PAT. Final: Cornell 27, Dartmouth 26. A stirring comeback conquest of Penn gave the Red an 8-1 year. In ’49, Cornell lost but one game. Dartmouth lost one as well, to Penn.

Midway through the 1958 season, Cornell, Dartmouth and Princeton stood together in first place among Ivies with 4-1 records. Cornell had lost 55-0 to Syracuse in its last ever game with the Orange. All time, it’s C.U. 22, S.U. 11. Dartmouth had lost only to Harvard. Cornell had held that Tiger. C.U. 34, Princeton 8. Then the Red tripped @ Brown, 12-8. Dartmouth was next week. Coach Bob Blackman’s team was loaded. The Dartmouth D throttled Lefty James’ guys 32-15, at Ithaca. Halfback Jake Crouthamel led a bruising attack. The Green closed the season at Princeton with a 21-12 which gave the Tiger a 5-2 record in the Ivies and a tie with Cornell, which won 19-7 at Penn, for runnerup in the league. It was the first of many Ivy titles for Dartmouth.

Ed Marinaro and his fellow Redmen Redders strode through the autumn of ’71 unbeaten. Big Ed was en route to a multitude of NCAA rushing records, including 24 TDs for the year. Then came Dartmouth at Hanover, where Crouthamel had succeeded Blackman. His team had lost only to Columbia. Marinaro crossed the last white stripe five times at Penn (41-13) and Dartmouth twisted the Tiger tail, 33-7. So both finished at 8-1 and therefore shared the Ivy title. Marinaro ran second to Auburn’s Pat Sullivan for the Heisman Trophy but won the Maxwell Award.