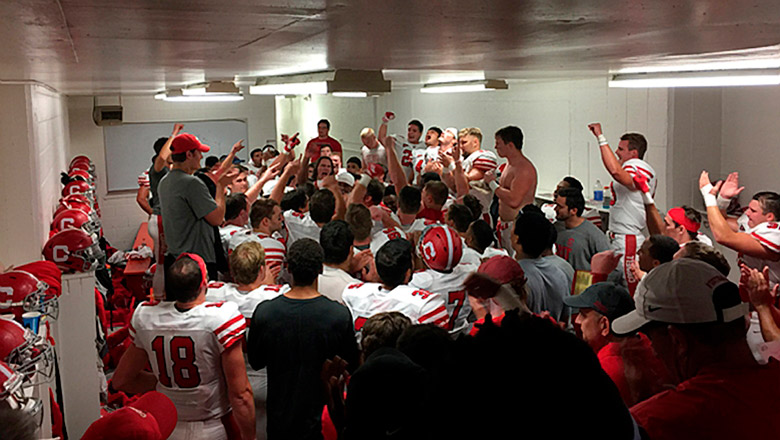 “This team throughout the preseason and coming into this week has collectively a much higher level of confidence than we’ve had in the past,” senior captain Jackson Weber told the Cornell Sun. “We trust each other. We believe we’re going to get the job done from start to finish, and that shined through in the end and we sealed the deal.”

“We came out a little slow,” Weber continued. “They’ve played two games, we haven’t played anyone. Once we got our game legs under us, we started to excel.”

Said sophomore running back Chris Walker: “The confidence in one another is different,” Walker said, “More playmakers this year. We’ve got a lot more talent and depth this year.”

“It’s just so fun to see the guys hard work pay off,” Head Football Coach David Archer said. “It’s great to see them to battle back from adversity and show some grit and get the win.”

“It started with [the offensive] line,” Walker added. “We’ve got a lot of upperclassmen that really set the tone for us and they got the edge going.”

In speaking about how the Big Red defense made key stops in the closing minutes, Coach Archer said, “It’s a testament to the conditioning, because obviously they were moving the ball and pushing us around,” Archer said. “When it mattered and when we had to come up with something, we did. I’m so proud of [defensive coordinator Jared] Backus and the defensive coaches and the defensive kids.”