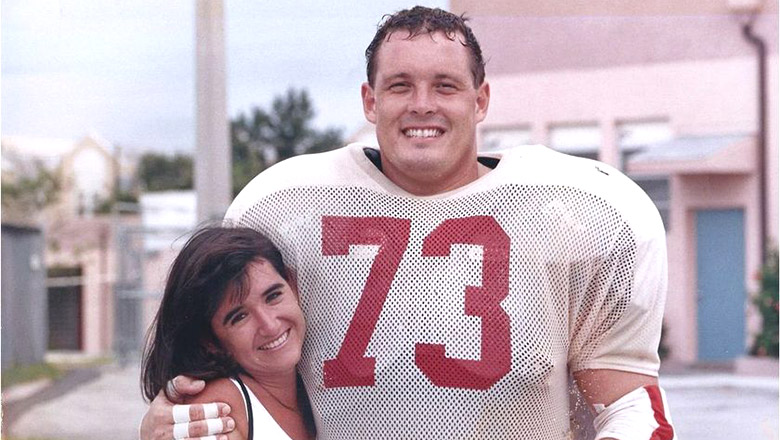 Originally published in the Ottawa Citizen on October 23, 2017 by Wayne Scanlan

Lisa McHale was relieved to learn her husband had been diagnosed with Chronic Traumatic Encephalopathy (CTE).

This, of course, was long after Tom McHale, just 45, had died in 2008 of an accidental drug overdose.

The news of a degenerative CTE diagnosis, from Dr. Ann McKee at the Boston University CTE Centre, brought some clarity and understanding to Lisa McHale, emotions she shared in Ottawa last week during a brain health awareness symposium at Algonquin College.

“Years later, when I fully understood Dr. McKee’s diagnosis, I remember telling her that she did more than help me understand what happened to the amazing man who I had been married to,” Lisa said. “She actually gave me back my Prince Charming.”

Lisa, who lives in Tampa Bay, was invited to Ottawa to help broaden awareness of CTE issues. Boston University has become the epicentre of CTE research in North America and data from BU and the Concussion Legacy Foundation have many questioning the health costs of football. Toronto has a smaller, but growing brain bank, as the science continues to progress and evolve.

When Chris Nowinski of the Boston brain bank first asked Lisa for her husband’s brain to study, she told him: “You aren’t going to find what you are looking for.”

These were early days in CTE study. By 2008, only a handful of former athletes had been diagnosed with CTE, and Tom’s brain was one of the first to be examined. Lisa only consented because she felt Tom would have wanted to help others.

What she learned from the test results floored her: Tom had advanced CTE, Stage 3. Stage 4 is the highest, usually associated with full-blown dementia. Several of Tom’s key brain functions, including executive function, impulses and decision-making, were all under siege by CTE.

Suddenly, a lot of things made sense to Lisa, rendered a widow with three young sons. She recalled her husband, who had dreamed of running his own restaurant one day, becoming too weary, in his late 30s, to stand on his feet for periods of time.

The former offensive lineman, who rarely complained of pain, was now taking opioids for pain relief and withdrawing from friends and family.

Lisa had heard stories about former pro athletes struggling with addiction and arrests after leaving their sport. Like most, she figured these were spoiled athletes unable to cope outside the spotlight.

She knew that wasn’t the case with Tom.

Lisa and Tom met when she was 19 at Cornell University. He had eschewed a full football scholarship offer at the University of Maryland in order to pursue his dream of being a restaurateur, opting for the prestigious hotel management program at Cornell.

Tom did play football at Cornell, but studies were his priority. He made the NFL as an undrafted free agent, first at Tampa Bay in 1987, and later with Philadelphia and a single year in Miami in 1995, Don Shula’s last season coaching the Dolphins.

Some players have to be dragged off the field when the lights dim. Tom, at 32, walked away on his terms following nine seasons, with offers on the table to play a tenth.

Football hadn’t defined him, and here was a chance to pursue the business career he had always imagined, this gentle giant who didn’t admit to being an NFL player unless someone mentioned it.

“Of all the many things that made Tom McHale remarkable, the fact he had ever played in the NFL wouldn’t have made my top 10,” said Lisa.

“He truly was one of the really good guys — he was bright and engaging, handsome, charming. He was principled and driven. He was a fantastic father, and an even better husband.

“At times I thought maybe he was too good to be true.”

In a matter of years, the exemplary person that was Tom became lost in a cloud of depression, anxiety and exhaustion. Lisa found herself married to a stranger, someone who no longer loved music, bike riding and coaching his boys in Pop Warner football.

Tom sought help, but couldn’t find peace. A doctor prescribed powerful, addictive pain medication and he tried to get clean but died of an accidental OD, not having a clue what changed his life so dramatically. He wasn’t even known to have suffered head trauma in football.

“What a gift it would have been for Tom to know he was not alone, and there was a logical reason for what he was experiencing, and that it wasn’t his fault,” Lisa told her Ottawa audience.

About a year after Tom’s death, Lisa was back on the phone to Nowinski in Boston, offering to help the Concussion Legacy Foundation. Today, she is its director of family relations, working with families who donate brains for scientific study.

When football players crash and burn in retirement, there is better understanding now of potential underlying cause.

“I can’t tell you how many times I’ve heard family members say, ‘I wish I had known’ (about potential brain disease),” she said. “I would have been more patient, less resentful, more compassionate.

“It is my hope that this increased awareness will make a world of difference for those struggling with it.”

Posted in In Memory of, News and tagged tom mchale