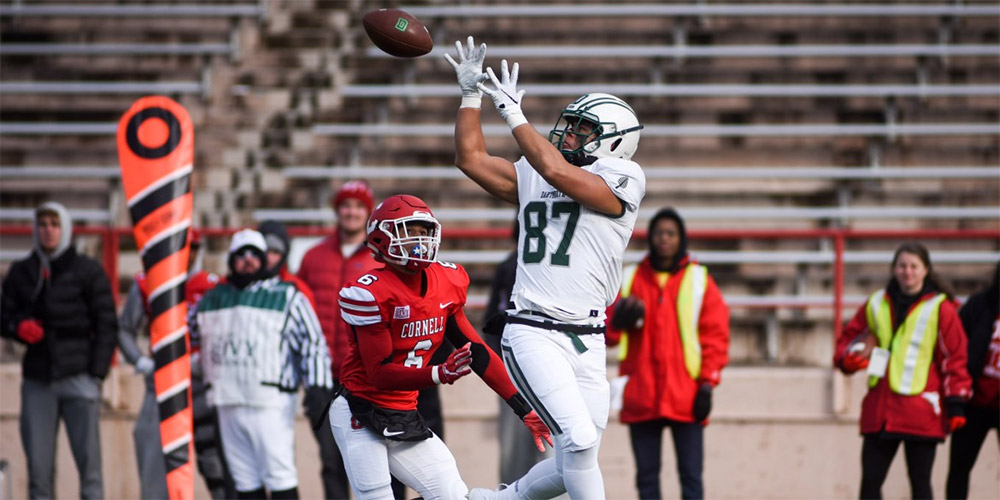 Cornell football head coach David Archer ’05 remembers the last time a winning Ivy season was brought back to East Hill. It was his senior year, and he was an offensive lineman part of a Cornell squad that clinched one of three winning Ivy records so far this century. He remembers all the injuries and toils that went into the rare winning record. And he remembers the euphoria that came with it.

Archer believed the Cornell football team of now, despite entering the season’s penultimate game against Dartmouth at 2-3 in the league, had the tenacity and moxie to to finally end the 13-year skid and bask in the glory he remembers from 2005. Cornell needed to win out on the year to accomplish the feat, but a 35-24 loss to the Green on Senior Day sunk Cornell’s record within the Ancient Eight to 2-4, making next weekend’s finale at Columbia nothing more than the potential for a moral victory over a rival to close out the season.

“You go into the year believing you’re going to win the league. Particularly the last couple of years, I’ve really felt that way,” Archer said after hopes of a winning league record were dashed by the Green. “It’s a hard pill to even adjust the goal during the year. … But I’m certainly proud of these guys, and I wanted more for them. For sure.” 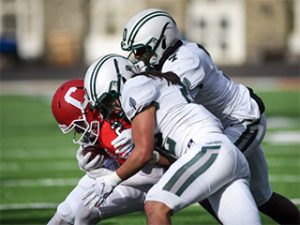 At times against Dartmouth Saturday, it looked like Cornell might just accomplish the improbable against the No. 7 defense in the FCS. A 21-0 deficit was quickly erased by a 17-point second quarter, and a bite was taken out of a later 35-17 deficit late in the game. But the rally was too little too late, and even though Cornell scored the most the points of any team against Dartmouth this season, the Green showcased why it’s placed among the top of the Ivy League and locked down for the win.

“And we didn’t even play remotely close to how well we should have played and how well we can play,” said senior wide receiver Lars Pedersen, who was one of 25 individuals to be honored on Senior Day Saturday.

Dartmouth’s offense came in bursts, powered by the two-headed quarterback attack of Derek Kyler and Jared Gerbino. Gerbino was the spark plug for the Green’s offense, using his feet for over 100 yards and two touchdowns on the ground — both of which came in the third quarter lead-padding rally.

But where Dartmouth excelled, at least at the early onset, was in the air. With the most rushing attempts of any team in the Ivy League, the Green has built itself as an overwhelmingly run-first team this season, so an aerial attack to begin the game caught a Cornell secondary playing without its key player in junior safety Jelani Taylor off-guard.

The secondary was especially exposed when the Green used some trickery to open the scoring, as Kyler found the unusual target of offensive lineman Jake Guidone for the 27-yard score. Kyler would later hit J.J. Jones for a 22-yard touchdown the next drive, and Rashaad Cooper rushed in seven yards for the 21-0 lead. 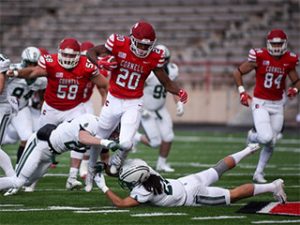 “It was rusty in the beginning. We thought they were going to run it and they started passing on us,” said senior cornerback D.J. Woullard, who had an interception in his final home game. “[Those were] things we didn’t gameplan for, but we made our adjustments … and we defensively stopped them. I felt like we gave them a game.”

“We wanted to change it up and play something they didn’t expect and we kind of tricked ourselves a little bit,” Archer added. “Not having Jelani in that situation particularly hurts because he lines us all up.”

Junior running back Harold Coles picked up his defense when it struggled early, tallying a pair of touchdowns in the second quarter — one a seven-yard run and one a 21-yard catch-and-run — to dig into the Dartmouth lead. The scores sandwiched a career-long 43-yard field goal from senior Zach Mays to make it a 21-17 game at the break. 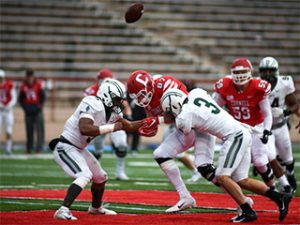 Both third quarter touchdowns came via Gerbino on the ground as Dartmouth moved back into its bread-and-butter rush attack as the game progressed. It was how Dartmouth was able to muster by Cornell, but inthe loss Archer liked what he saw in the overall resolve leading into the season finale — just a little too late.

Now Cornell is left with nothing but a pure moral opportunity in front of it. The Ivy title is long gone. The winning record just passed by.

No matter if Archer believed the team could have competed for the Ivy League title, those hopes were quickly erased come week six’s demolishing at the hands of Princeton. Now that the goal of ending the streak of losing seasons has come to an end, too, all that is left is to finish the season with an Empire State Bowl on the Lions’ home turf.

“All we can do now is go out and try to get this win [against Columbia] and finish our career on a good note,” said senior quarterback Dalton Banks. “The best thing you can do is end the season on a win because it makes the whole offseason a little better.”