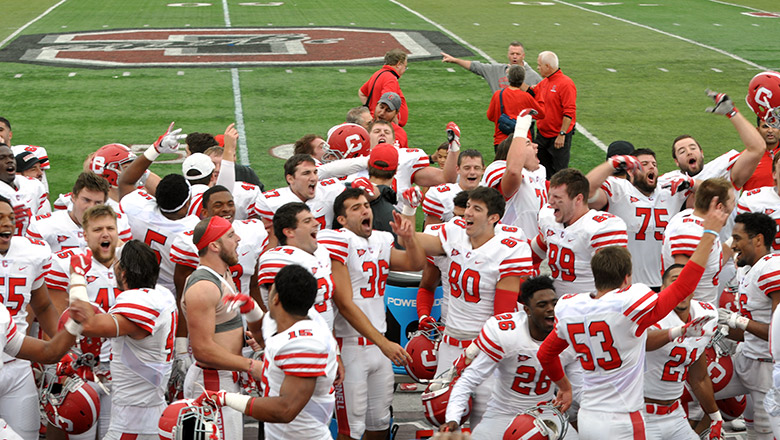 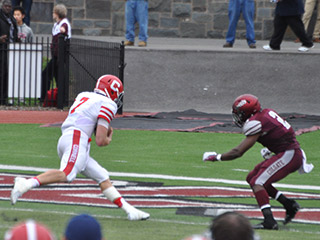 Banks, who shared the weekly honor with Harvard quarterback Joe Viviano, tied a school record with five touchdowns in the 39-38 victory over the Raiders. He helped lead a comeback from down 28-5 in the first half by completing 25-of-45 passes for 454 yards and four scores and also ran for a touchdown. None of his completions were more important than his final one – a perfect 19-yard strike to Collin Shaw in the back right corner of the end zone that gave the visitors their first lead with 0:28 remaining. The 454 passing yards ranks eighth in a single game in school history, while his four passing touchdowns were one shy of a school mark. Banks threw touchdown passes of 70, 21, 63 and 19 yards and ran for a 5-yard score in the win. 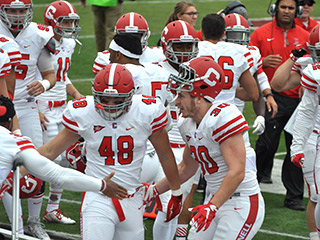 Frimel was all over the field to pick up his first conference weekly award. He had a career-high 10 tackles with 2.0 for a loss and a sack. He was in on arguably the two biggest defensive plays of the day, as his third-down sack early in the second quarter was recorded as a safety, getting Cornell on the board and giving the visitors some momentum after falling behind 21-0. He then plugged a gap and corralled a Colgate runner for a 1-yard loss on fourth-and-1 from the Cornell 42, giving the ball back to the Big Red and setting up Banks’ heroic throw to Shaw that proved to be the game winner. Seven of his 10 tackles on the day were on plays that gained two yards or less, including a stop for no gain on a third-and-1 late in the third quarter than set up the offensive possession that allowed the Big Red to get within 38-33 entering the fourth. 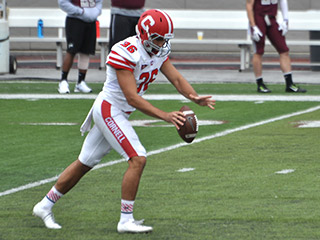 A preseason first-team All-American and three-time first-team All-Ivy pick, Fraser punted three times against the Raiders and pinned the defending Patriot League champs inside their own 7 all three times. He averaged 36.0 yards per punt and made Colgate start at their own 2, 7 and 4. The last of those, early in the second quarter, set the scene for Frimel’s sack on third down to effectively start the Big Red comeback. The punt team did not allow a return yard in the win. Fraser’s second career Special Teams Player of the Week nod continued the Big Red’s dominance in the category for this season—sophomore place-kicker Zach Mays took home the honor the first two weeks of the year.